US Treasury Bonds Yield – How it affects your Mortgage Rates?

Every day we are bombarded with news of Trump, US economic plan, TPP breakdown and so on. Ultimately all these have direct or indirect effect on the future of Singapore as we are a very open economy.

A simplistic analysis of the Trans-Pacific Partnership (TPP) and its impact on Singapore shows that there is no clear relationship on Interest rates. Perhaps Foreign Direct Investments (FDI) leads to a stronger Singapore dollar, but the impact is not expected to be huge and also it is indirect.

What is the Impact of a more protectionist USA

Does it matter that the United States become more protectionist?

Yes, it matters, the United States is still the world’s largest importer by dollar value. Hence a more protectionist USA will tend to lead to potential import tariffs into the USA. This means potentially slower export growth for the rest of the world that exports to the USA.

Apart from that, due to potential trade barriers erected by a more protectionist government in the USA, that means that US companies that invests abroad with the aim of serving the US markets will consider to move money away from the emerging markets and back to the US to avoid such tariffs. This causes the US dollar to appreciate and a drying up of Foreign Direct Investments (FDI) from the US as such companies may consider investments within the United States.

What about President Trump and his economic policies?

President Trump has supported reducing tax rates for everyone. He also proposed an investment of US$1 Trillion in infrastructure over a 10-year period. The US economy is about US$18.6 Trillion (2016, estimated). US$100 billion is only 0.53% of the entire US economy.

The talk about US$1 trillion (or US$1000 billion) over a 10-year period investment in infrastructure is inflationary, hardly holds any water. Moreover, some of these US$100 billion is funded by tax breaks, hence the government does not pump in the full US$100 billion, but rather US$15 to US$20 billion in tax breaks for investors to invest that US$100 billion through equity and borrowings.

Hence such a miniscule investment would hardly be inflationary. Again I would classify this as market “noise”.

Why then are bond yields rising? Bond yields are rising not purely due to infrastructure spending, but also higher deficit due to lowering of tax rates for individuals as well as for corporations, and an expectation of faster GDP growth. Higher deficit requires more borrowing to fund the deficit, and more borrowing means higher interest rates. Unless there is another worldwide financial crisis, the world is unlikely to take kindly to US unilateral quantitative easing (a near equivalent of printing money) whereby the Federal Reserve prints it’s own money and buys the US treasury debt.

So the market (hedge funds, pension funds, investors, etc.), reacts through treasury bond yields. Note though, these are market opinion, they still can be wrong, but the market nonetheless reflects the collective wisdom of the funds and capital markets.

As can be seen, the yield curve on the 1st Nov 2016 is lower than that on the 25th Nov 2016. Trump’s was elected on the 8th Nov 2016. The yield curve has risen. This simply reflects what the market thinks about Trump’s economic policy. And in this case, the market thinks that there could be inflationary pressures in the years ahead and hence a possible higher interest rates.

There is a knock-on effect of rising bond yield. Trump’s economic policies leads to the market interpretation of his policies. This leads to a change in the US treasury bond yield curve. This impacts the US interest rates. The Federal Reserve may now be ready to react by raising Federal overnight funds rate.

If/when the Federal Reserve raise the Federal funds overnight rate, then this will lead to funds inflow into the US dollar, leading to US dollar appreciation against other currencies. Other country’s interest rates will have to rise to prevent a rapid currency depreciation caused by the loss of funds (Capital outflow). Singapore is no different, and consequently Sibor and SOR will have to move up to mitigate (loss of funds) capital outflow. Alternatively Sibor and SOR would have already started to move up anticipating possible Federal Reserve rate hike moves.

Hence your mortgage rates will surely rise along with the rising Sibor and Sor. Banks in Singapore will be busy revising their fixed rates upwards. Hence in such a situation, it may be wise to quickly lock in to a fixed rate home loan package. 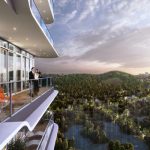