The 3-month London Interbank Offered Rate, LIBOR, has surged to a seven-year high of 0.825%, up 21 bps this year. It has been climbing steadily since the Federal Reserve raised interest rates last December. At the end of June, the BREXIT trigger further aversion to lending and added fuel to LIBOR’s upward momentum, enabling it to reach its recent highs.

On the other hand, the 3-month Singapore Interbank Offered Rate, SIBOR, declined to 0.872%, after reaching a high of 1.254% on 19 January this year. This is in sharp contrast to the strong correlation that LIBOR and SIBOR share historically.  We believe this breakdown in correlation is temporarily. The rising LIBOR could be a harbinger of things to come – more specifically financial market stresses. We share three thoughts on the rising LIBOR trend:

The rise of LIBOR is often caused by strong demand for US Dollar, which indicates short-term funding pressures. The recent move, however, could be attributed to looming reforms in money market funds (MMFs) that is due to be implemented on 14 October. The reforms will require some “prime” MMFs to float their Net Asset Value (NAV) for funds that invest into corporate debt. Investors are redeeming funds out of the “prime” MMF, as evidence by the outflow of $450 billion since end-2015. To make things worse, “prime” MMF are hoarding cash and not investing into short-term securities in anticipation of further redemption approaching the 14 October deadline. This in turn pushes LIBOR higher.

SIBOR is the equivalent of LIBOR in Singapore. It is a pricing mechanism of the daily interest rate that banks are willing to borrow and lend to each other. In recent years, SIBOR has played an increasingly significant role in the property market with many homeowners taking up mortgages pegged to SIBOR. Thus, a rising SIBOR will result in higher interest payments, adversely affecting the debt servicing capabilities of households.

However, for the past few months, SIBOR has deviated from its historical correlation. It declined instead of matching the steep climb of LIBOR. After reaching the high of 1.254% during the volatile market conditions early this year, SIBOR has waned to 0.872% as a result of low interest rate hike expectations. LIBOR is a critical reference interest rate for pricing trillion dollars of loans, mortgages and derivatives. As much as $300 trillion in contracts are estimated to be linked to LIBOR in a report by US Fed Governor Jerome Powell in a June Roundtable on the Interim Report of the Alternative Reference Rates Committee. A rising LIBOR will result in higher borrowing costs as LIBOR is used as the reference rate for 15-20% of household debt and 25-30% of business debt in the US (according to Goldman Sachs Research).

Another repercussion of a rising LIBOR is the drying up of liquidity in the banking system. Banks faced an inherent asset-liability duration matching problem where they borrow short-term funds to make long-term loans. Stress in the interbank liquidity may hit banks’ profitability via higher cost of funding. An adverse feedback loop may self-reinforce where banks have to call back loans and withdraw liquidity off the financial system. Counterparty risks also go up and further exacerbate the upward pressure on LIBOR.

So far, the rise of LIBOR has not affected the relative calm we are currently seeing in the financial markets. Either “Lie-bor” is lying or the financial market is too complacent. Turbulence may return if the US Fed Chair Yellen signal a rate-hike in the next few months. This will result in a market correction as a result of tighter liquidity as LIBOR drives higher.

“All opinions are that of the Guest Contributor.” 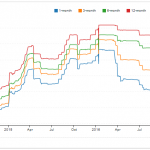 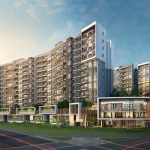