CBRE announced on March 1st that it has been appointed as the exclusive marketing agent for 112 Telok Ayer Street, a prime 999-year two-storey conservation shophouse located just across the Telok Ayer MRT station.

The sale of the prime 999-year two-storey conservation shophouse will be conducted via an Expression of Interest exercise, which will close on 12 April 2021 at 3pm.

Prominently located within the Central Business District and directly opposite Telok Ayer MRT Station along the Downtown Line, the prime 999-year two-storey conservation shophouse benefits from prime road frontage along Telok Ayer Street contributing to high visibility and footfall. Sitting on a 999-year land plot of approximately 770 square feet, the two-storey shophouse that comprises an attic has a total floor area of approximately 1,550 square feet.

Under the 2019 Master Plan, the site of the prime 999-year two-storey conservation shophouse is zoned for “Full Commercial” use within the Chinatown (Telok Ayer) Conservation Area.

The guide price for 112 Telok Ayer Street is S$8.88 million. As a commercial property, the sale offer of the prime 999-year two-storey conservation shophouse is open to both local and foreigners, with no additional buyers’ stamp duty or sellers’ stamp duty imposed.

Mr Clemence Lee, Senior Director of Capital Markets, Singapore, CBRE, said, “The supply of CBD shophouses, which are perceived as trophy assets, has always remained tight, resulting in strong interest for such properties, with prices continue to hold. Hence, 112 Telok Ayer Street offers buyers an excellent opportunity to acquire a fully-let 999-year shophouse tenanted to an F&B operator, and which is strategically located just across the Telok Ayer MRT station.”

He added, “Given the strong proposition and palatable investment quantum of below S$10 million, we expect buyers who have been waiting at the sidelines to now come forward and evaluate this opportunity seriously.”

The Chinatown (Telok Ayer) Conservation Area is an area that exudes nostalgic charm and is home to renowned restaurants, local eateries, cafes, bars, gym, showrooms and offices. Popular food and beverage establishments include Bitters and Love, Employees Only, Birds of a Feather and Nouri, to name a few.

Mr Paul Ho, chief mortgage officer at iCompareLoan, said: “Singapore remains an attractive destination for savvy investors even in the Covid-19 pandemic. For such investors, the prime 999-year two-storey conservation shophouse in Telok Ayer Street will be a worthy proposition. The commercial property remains attractive because of their freehold nature, and also because it is in Districts 1.”

He added, ““Also, recently we have witnessed high levels of interest in the conservation shophouses in the CBD area. So, the prime 999-year two-storey conservation shophouse is a rare opportunity to acquire a highly coveted conservation shophouse, right at the heart of the Central Business District. These commercial assets provide immediate rental income and potential strong reversionary rental, particularly with the diverse range of entertainment, cultural and lifestyle attractions in the vicinity.”

District 1 is in the city centre of Singapore. Located in the south-eastern part of the Central Region, the Central Area consists of eleven constituent planning areas, the Downtown Core, Marina East, Marina South, the Museum Planning Area, Newton, Orchard, Outram, River Valley, Rochor, the Singapore River and Straits View, as defined by the Urban Redevelopment Authority. The term Central Business District (CBD) has also been used to describe most of the Central Area as well, although its boundaries lie within the Downtown Core.

The Central Area is one of the most densely developed places in Singapore, with a large mix of commercial and residential developments packed into a space of only 1784 hectares. A great number of Mass Rapid Transit stations are concentrated in this area as well, especially interchange stations and stations along the Circle MRT Line.

Commercial/shop spaces in Singapore usually comes with 30-, 60-, 99-, or 999-year lease. Some may be freehold. For 99-year and shorter leasehold units, buyers should be mindful that financing institutions may quote a lower loan quantum for units running low on their lease.

The requirements for a commercial loan, however, are more stringent. For example, the LTV ratio is contingent on whether the property is for owner-occupation or investment, with the latter subjected to stricter criteria by some banks. The next section explains the approval conditions in greater detail. 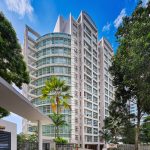 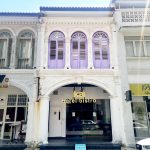