Showsuite Consultancy has launched an Expression of Interest exercise for a four-storey commercial and residential building at Balestier Road.

The 4,377 sq ft 4 storey mixed used development site is zoned ‘Commercial and Residential’. It is not gazetted for conservation, unlike other heritage shophouses in the area.

The 18,310 sq ft 4 storey mixed used development comprises two shop units on the ground floor approved for restaurant use. The second floor commercial space may be used for retail, offices or students’ accommodation, while the third and fourth floors comprise six apartments with a total of 22 ensuite rooms.

The freehold 4 storey mixed used development is adequately served with 9 carpark lots in the basement.

“The property is ideal for a trendy co-living operation for a variety of reasons. It could potentially house around 45 rooms upon refurbishment, thanks to its corner plot configuation. The Balestier area has a charming heritage and is geographically central, with employment clusters such as the Novena medical hub located close by. Shaw Plaza is merely 100 meters away. Students from the nearby Curtin Singapore and St Joseph’s Institution would also find the building convenient,” says Mr Karamjit Singh, CEO of Showsuite Consultancy.

“The central location and the basement carpark also makes this building suitable for commercial schools as well as rising businesses such as food delivery distribution centres.”

“The building is owned by one company held under a single title, and offers the purchaser the naming and signage rights,” adds Mr Singh.

“The guide price for the freehold 4 storey mixed used development is $22 million, which translates to an estimated blended rate of $1,200 psf on the existing gross floor area (GFA). This works out to roughly $1,750 psf on the commercial GFA and $950 psf on the residential GFA,” says Mr Singh. “The rental yield potential is about 4% per annum”.

“Such investments are also open to foreigners. In time to come, the building could be redeveloped as it is not constrained by conservation guidelines”.

Prospective purchasers are invited to submit their offers for the freehold 4 storey mixed used development by 2.30 pm on Monday, 17 August 2020.

Balestier is a subzone located in the planning area of Novena in the Central Region of Singapore. The main road, Balestier Road, links Thomson Road to Serangoon Road and the road continues on as Lavender Street. The area is home to rows of shophouses, low-rise apartments and commercial buildings as well as a shopping mall known as Shaw Plaza.

The precinct was named after Joseph Balestier, the then colony’s first American consul from 1837 to 1852 and the owner of a 1,000-acre (4.0 km2) sugar plantation called Balestier Plain, which failed and was put up for sale. Balestier was in Singapore between 1834 and 1852 and was a botanist and agriculturist. The area was named after him as it was where his plantation was located. As new settlers populated Balestier Road from the late 19th century, they established villages and grew crops such as taro was grown. Balestier hired a number of immigrants on his estates.

There are several lighting and electrical shops along Balestier Road, which is also home to the Ceylon Sports Club and the Indian Association. The area is known for its food such as bak kut teh and chicken rice. In the area, there are several apartments, condominiums, and budget hotels.

A row of of shophouses was constructed in the late 19th century in Balestier and have been since been conserved, though some have made way for new development. These shophouses were to provide services to residents. In the 1880s, several bungalows were constructed, with one still remaining at Tai Gin Road known as the Sun Yat Sen Nanyang Memorial Hall (formerly the Sun Yat Sen Villa or Wan Qing Yuan). Overtime, with the renewing of the past historical facts of China, the 1911 Chinese revolution and its leader Sun were incorporated with the story of Singapore’s independence.

Mr Paul, chief mortgage officer at iCompareLoan, said that “although the Covid-19 circuit breaker makes real estate sales difficult at the moment, the 4 storey mixed used development at Balestier Road for sale is in a good location and is hard to come by.” Mr Ho believes smart investors who are flush with cash, will resort to value hunting instead of choosing residential properties which are still selling at unbelievable prices.

Mr Ho added that given the land scarcity in Singapore, demand for mixed use development in Singapore will continue to rise over the long term. He pointed out that Singapore continues to be a global financial centre and a trade hub with high livability scores – all of which attracts high net worth investors to the Republic. All these factors will inevitably fuel demand for commercial property in Singapore he added.

Mr Ho believes that value buys in the property market right now are are landed inter-terrace houses which’s per square feet price on the built-up area is usually less than $1,000 and commercial properties.  But Mr Ho cautioned that the bigger challenge for buyers of commercial property is securing the best commercial loans. 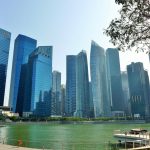