Ann Siang Road conservation shophouse is prominently located near the junction of Ann Siang Road and Ann Siang Hill, a busy street with an abundance of eateries, trendy bars and associations

Commercial conservation shophouses, particularly in prime central locations, are highly sought after by investors as they are rarely available and tightly held. Sales of shophouses have shown no sign of abatement since Singapore’s Phase 2 reopening period during Covid-19.

In the month of October and early November, a flurry of shophouses transacted in Districts 1 and 2, such as those at 77 Amoy Street, 35 Kreta Ayer Road, 53 Craig Road, 28 Duxton Hill and 48 Tras Street. Prices transacted thus far have reflected the resilience and popularity of shophouses, despite the ongoing pandemic. With vaccine development and plans for air travel bubbles still underway, buying sentiments have lifted.

The relatively lower commercial loan rate has also enhanced buying interest in conservation shophouses. As shophouses are zoned commercial under the Master Plan 2019, the sale is open to both locals and foreigners, with no Additional Buyer’s Stamp Duty and Seller’s Stamp Duty imposed on the purchase.

The ground floor unit in the Ann Siang Road conservation shophouse is currently leased to an F&B outlet and has a basement which serves as a kitchen.

The 999-year leasehold shophouse is prominently located near the junction of Ann Siang Road and Ann Siang Hill, a busy street with an abundance of eateries, trendy bars and associations. It is also within the Telok Ayer Conservation Area.

The location of the Ann Siang Road conservation shophouse is easily accessible, with the upcoming Maxwell MRT station just 250 metres away.

Mary Sai, Executive Director of Capital Markets (Land & Building, Collective & Strata Sales), Knight Frank Singapore, says, “ The guide price of S$13 million, or S$3,005 psf over floor area is very attractive, as the locale has its own charm and appeal to both investors and owner-occupiers. Savvy buyers who have followed the shophouse market closely are fully aware of its potential for capital appreciation, as well as the possibility of renting the property out to multiple tenants for maximum rental income.

“Furthermore, the owners of some shophouses at nearby Club Street have been observed to be asking for more than $4,000 psf, which makes 18 Ann Siang Road an even more compelling offer.”

Ann Siang Road in Chinatown begins from a road known as Ann Siang Hill and connects to Kadayanallur Street. It is named after Chia Ann Siang (1832‒1892) who was a wealthy Chinese businessman. Situated on the hill, both Ann Siang Road and Ann Siang Hill are lined with elegantly restored shophouses and richly decorated terraces. Most of these buildings were constructed between 1903 and 1941.

Keong Saik Road is a one-way road located in Chinatown within the Outram Planning Area in Singapore. The road links New Bridge Road to Neil Road, and is intersected by Kreta Ayer Road. Keong Saik Road was named in 1926 after the Malacca-born Chinese businessman, Tan Keong Saik, the son of Tan Choon Tian. The street in Chinatown is named in remembrance to his contribution to the Chinese community.

Keong Saik Road is located within a conservation area known as the Bukit Pasoh Conservation Area, which was given conservation status by the Urban Redevelopment Authority on 7 July 1989. The buildings in the area mainly consist of two and three-storey shophouses in transitional, late and art deco architectural styles. In 2017, it was selected as one of the top ten destinations in Asia by Lonely Planet Magazine.

One of the most sightworthy buildings is Cundhi Gong Temple at No. 13 Keong Saik Road, which was built in 1928 in the Nanyang style. The temple, which is dedicated to the Guan Yin, Goddess of Mercy, is a two storey building without a forecourt and has an area of 400 square metres. Sri Layan Sithi Vinayar Temple at (no. 73 Keong Saik Road was built in 1925. The temple was consecrated in 1973, 1989, 2007 and in 2019.  The five storey Rajagopuram was added in 2007 when the temple was renovated and redesigned.

Mr Paul Ho, chief mortgage officer at iCompareLoan, said: “Singapore remains an attractive destination for savvy investors even in the Covid-19 pandemic. For such investors, the portfolio of 3 conservation commercial shophouses in District 1 & 2 will be a worthy proposition. The properties remain attractive because of their freehold nature, and also because it is in Districts 1 and 2.” 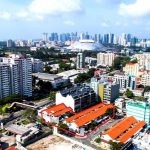 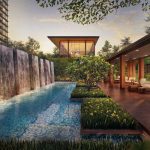