The recent rise of the USD corresponds to the US gradually emerging from the recession with unemployment rate dropping to 5.3% (as at July 2015) and an impending rise of Federal Funds Target Rate making the USD and US assets attractive. Hence many country’s currencies are weakening against the USD. Given that the US has unilaterally devalued its currency for years via Quantitative Easing (also known as printing money) and Japan has also devalued its currency unilaterally while China’s RMB has strengthened for years against major currencies for years, a slight devaluation in RMB is understandable. The fact that China tolerated years of higher currency value attests to its new determination to be seen as a responsible world partner in global economics.

With its current devaluation, it is still a long way from its lowest point.

“Spot yuan trading has been constantly hitting the 2 per cent limit of the currency’s trading band since December. It is allowed to trade 2 per cent either side of a reference rate set by the central bank and has been testing the lower limit.”

China’s RMB has been spot trading at the lower limit of the 2% band, hence the ~2% devaluation is inline with market forces. However what is unknown is how the market will react when the last day’s prices will become the mid point of the band for the next day for the mid to longer term.

“ a 1 percent depreciation in the real effective exchange rate boosts export growth by 1 percentage point with a lag of three months. At the same time, a 1 percent drop against the dollar triggers about $40 billion in outflows.”

There should not be too much worry of capital flight from China. China’s massive foreign reserves amounting to ~ US$3 trillion is more than sufficient to support the currency and China central bank can easily sell USD treasury bonds for RMB.

The RMB has risen from June 2010 to May 2013 by over 15% against a trade weighted basket of reportedly some 61 currencies. (Bank of International Settlements)

Hence this widening of the trading band with the result being devaluation should be seen in the correct perspective. When the market forces recover, it could very well be appreciation as well. The devaluation against the SGD is not as severe as SGD similarly has strengthened against major currencies with the notable weakening against the USD. Hence the devaluation will be noted more for its psychological significance than its actual impact.

As Singapore is an advanced economy, exports to China may be intermediate or advanced value-added-products which may not be as price sensitive and hence it should be able to withstand some price increase.

Impact of Devaluation On Singapore dollar

If Chinese nationals think that the devaluation of the RMB is a trend, we may yet see some exodus of funds from wealth chinese to the rest of the world. Tom Orik (Chief Economist at Bloomberg estimated that a 1% drop in currency value leads to about $40 billion in exodus of funds, with a 3 month lag.) We may see a fraction of these $40 billion come onto Singapore’s shores. Will China’s currency weakening cause SIBOR to Rise?

If China currency weakens, it could also drag Singapore dollar lower against the US dollar as Singapore needs to carefully manage its currency vis-à-vis its basket of currencies, unless Singapore changes its policy stance to weigh more towards USD.

When the Singapore dollar drops against the US dollar, there is a chance that Sibor interest rates will have to rise to keep pace against exodus of funds.

An explanation of how currency weakens affects interest rates is found in this link about Mortgage Interest Rates. (Reference 3)

Impact on Export and Interest rate

RMB devaluation will lead to more imports from China. However I foresee that a 2% devaluation of the RMB will not significantly affect Singapore’s exporters as Singapore is an advanced economy which exports intermediate goods and valued added products, hence these products should be able to withstand a 2% impact.

What is the Best or worst case scenario for Singapore?

In the best case scenario, exports to China may even rise in value due to RMB devaluation as many of the factories or imports may be already contracted and committed way before hand and probably structured in USD.

Positive development from China’s removal of a pegged mid-point

China’s central bank generally sets a daily midpoint for the yuan, around which the currency can move up and down within 2%. But on Tuesday 11 Aug 2015, the People’s Bank of China surprised markets by announcing that going forward, the midpoint will be based on the previous day’s closing price. This moves china towards greater exchange rate flexibility and more freely traded. With this move, China moves one step closer towards having RMB included into IMF’s basket of special drawing rights currency, an elite group of currencies used to value reserve assets. One day RMB may become the world’s number 1 reserve currency.

Is the impact on the property market a positive or negative one and why?

Shares of Singapore exporters which have a big component of china sales will be impacted. China’s stock markets may see impact from exodus of funds, but it is hard to estimate the effect now.

Which real estate segments would be most affected? Industrial?

I doubt it would impact Singapore’s real estate segment in a big way, unless China’s wealthy starts to move their funds to Singapore by ways of purchasing commercial or industrial properties.

How far would China devalue its currency?

While China still can intervene in the currency market, the exchange rate is now more freely traded as the mid-point price is determined by the previous day’s closing price. Market forces will dictate how much the currency will trade. China’s central banks can intervene when the need arises.

There is no cause of believe this is a competitive currency devaluation. 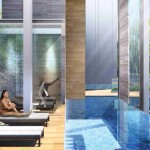 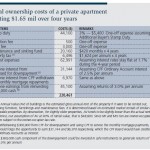