The upcoming seventh MRT line, Jurong Region Line, is expected to lift the fortunes of not just the properties in Jurong Lake District, but also the real estate in Boon Lay and Choa Chu Kang. Transport Minister Khaw Boon Wan in announcing details of the Jurong Region Line today said that the new line will serve the Jurong area and the western part of Singapore.

Mr Khaw said that it will relieve pressure on the crowded Jurong East Interchange Station by directly connecting the north to the Jurong region via a new Jurong Region Line interchange station at Choa Chu Kang. The Jurong Region Line will be developed to support the Government’s urban decentralisation strategy, and car-lite policy.

In announcing the Jurong Region Line, Mr Khaw recounted the evolution of Jurong and the western part of Singapore:

“Until the 1950s, Jurong was mostly swamps, jungles and small fishing villages. In 1961, Dr Goh Keng Swee mooted the idea of turning Jurong into an industrial park, to catalyse Singapore’s economic development. Today, it is a major economic and residential centre, home to 300,000 residents and workplace for 400,000, and growing.

Trains came around the same time. The EWL was extended to Lakeside in 1988, and Boon Lay in 1990. The same year, a spur line linked up Jurong East and Choa Chu Kang. It was subsequently merged with the rest of the NSL in 1996. The EWL was further extended to Joo Koon in 2009, and to Tuas last year.”

The Minister said that the Jurong Region Line marks a quantum leap in the Government’s improvement of transport infrastructure for Jurong.

The Jurong Region Line will be 24km long with 24 stations, and will run above-ground. It will open in three phases, starting from 2026. The Jurong Region Line will give commuters route choices. For example, the two interchange stations at Choa Chu Kang and Boon Lay will connect the North-South Line (NSL) and East-West Line (EWL), giving commuters alternative travel routes.

“This will help to redistribute and relieve train loading between Choa Chu Kang and Jurong East stations, so that commuters can enjoy more comfortable rides,” Mr Khaw said.

Mr Khaw said: “When all these plans come together, Jurong will be a water front business hub nestled in greenery, served by good public transport connections, as well as amenities to support active mobility. This is our vision for Jurong – a vision which I am fully confident that our fourth-generation leadership will be able to discharge and make it a reality.”

And added: “To realise the vision, there will be inconveniences and some heartaches along the way when construction begins. So let me first thank in advance the residents, schools and businesses near the Jurong Region Line construction sites. LTA and the contractors will minimise any inconvenience. In life, no pain is no gain. But for this, we will make sure small pain but big gain.”

It was earlier announced that the high-speed rail (HSR) project connecting Singapore with Kuala Lumpur is expected to deliver higher property prices and rev up commercial and retail activity in the Jurong Lake District area. The Land Transport Authority (LTA) has called for tenders for the design and construction of tunnels and associated facilities for the HSR and construction is expected to start next year.

Developments for the Jurong Lake District are centered around the Jurong East MRT station. With established businesses around the MRT station – like the International business park, IMM (a major shopping mall), along with other new shopping malls, a hospital, educational hubs, high rise offices and residential units – Jurong Lake District is looking very credible as a regional centre.

The Transport Minister’s announcement of the Jurong Region Line now, is expected to boost the prices of properties not just in the Jurong Lake District area, but also in areas where the interchanges are expected to be built – in Boon Lay and Choa Chu Kang.

Besides ramping-up the prices of landed and non-landed private properties in the western region of Singapore, the announcement of the Jurong Region Line may also lift the resale prices of Housing & Development Board (HDB) flats in that area.

According to HDB’s recent announcement, the median resale prices of flats in the Jurong and Choa Chu Kang areas commanded some of the lowest prices. All this may change with the Jurong Region Line, especially for Choa Chu Kang which is earmarked to be one of the interchanges for the new western line – especially for flats which have more than 60 years in its lease.

HDB resale flat prices fell by 0.8 per cent, from 132.6 in 4th Quarter 2017 to 131.6 in 1st Quarter 2018, but if past property booms are indicative, HDB resale prices will rebound soon as it is unlikely that the Government will allow the HDB resale prices to drop for a continued period without intervening to correct it. 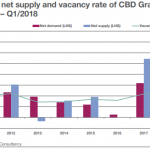 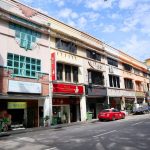