Pointing to a check of caveats downloaded from the URA’s Realis, Savills said that top foreign buyers came from China, Malaysia, India and Indonesia, and acquired a total of 869 units. In addition, foreigners that did not specify their nationalities also bought 173 units in the reviewed quarter.

“These non-Singaporean buyers were quite active in the new sales market, taking substantial number of units at Parc Botannia (57 units), Sophia Hills (34 units) and Martin Modern (34 units). In spite of the higher additional buyer’s stamp duty (ABSD) imposed on non-Singaporeans, the above-mentioned sales numbers indicated that the buying interest from non-Singaporeans has gradually returned, especially in the high-end market.”

The report also made the following observation about its outlook on 2018: “Supported by better-than expected economic growth, the outlook for the Singapore private residential market in 2018 is promising. Prices have started to recover from a slump which has lasted since late 2013 and will continue their upward trend in 2018, driven by bullish prices paid by developers for both private residential sites and GLS sites.”

“The return in buying interest may overwhelm the slate of new launches this year leading to an over-spill in demand for resale properties,” it added.

Previous reports have suggested that foreign funds (especially from China) are driving up en-bloc sale prices to new heights. It remains unclear if the price increases in the private residential property market will have a knock-on effect in the public housing market. 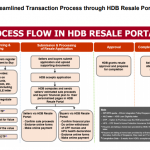