Following the relaxation of measures to allow the attendance of small-scale business events, Knight Frank has resumed its live property auctions to much success.

The only firm to host two auctions in October, the established auctioneering house successfully sold 25% of its properties put up for auction, within the month. Three properties were knocked down during its live and streamed auctions last month, with a further three more deals concluding pre- and post-auction.

October property auctions sees rapid, active bids were placed in particular for the properties at 14 Lorong Kismis and 45 Woodsville Close, which attracted 14 bids and 12 bids during the auctions, respectively.

45 Woodsville Close opened with a bid of S$2.6 million and was knocked down at S$2.77 million. The home is freehold, 3-storey intermediate terrace house on land sized approximately 1,795 sq ft and floor area of approximately 3,858 sq ft.

Sharon Lee, Head of Auction and Sales, Knight Frank Singapore, shares, “Despite the pandemic, interest in the property auction market has been sustained since the start of the year, with incoming enquiries growing every day. We’ve noticed that the pandemic has drawn out an additional set of buyers, as more look to invest and purchase locally, have more time on hand to seek out properties and take advantage of the lower interest rates being offered.

“As such, we’ve witnessed more owner sales being transacted and more realistic prices offered for such properties, as compared to pre-Covid times.”

After the successful October property auctions, Knight Frank said that it will hold the next round of auctions online on 13 & 27 November 2020. Interested parties can register to view the live, virtual event.

In March, Colliers International, in its research report which examined the performance of the real estate auction market in Singapore in 2019 and its forecast on auction listings this year, said total auction listings rose by 34% year-on-year (YOY) in 2019 to a new high of 1,458 listings – surpassing 2018’s record of 1,088 listings. The number of both owner listings and mortgagee listings saw strong increases last year, with mortgagee listings rising to a record level in 2019.

Auction listings scaled new heights
Due to a more challenging economic environment, total mortgagee listings surged by 59.1% YOY to 751 in 2019, driven mainly by residential sector. Meanwhile, total owner listings were up by 14.8% YOY to 707 as owners continued to sell their properties via auctions for maximum exposure and a higher chance to achieve optimal prices.

Of the mortgagee sale listings, the residential sector accounted for 57.5% of the total at 432 listings – up by 67.4% YOY. Retail mortgagee listings saw a 72.7% YOY increase to 114 as many were small units in strata-titled malls or locations with low foot traffic and had difficulty finding tenants or sustainable rents, leaving owners unable to support mortgage payments. Industrial mortgagee listings, meanwhile, rose 29.5% YOY to 189 and office mortgagee listings increased by eight times to 16 in 2019 from just 2 in 2018.

Ms Tricia Song, Head of Research for Singapore at Colliers International, said, “We believe the higher mortgage payments due to rising interest rates during 2015-2019, coupled with a subdued residential rental market, have contributed to the increase in residential mortgagee sale listings. Personal circumstances such as loss of job or bankruptcy could also have led to higher defaults. Post cooling measures in July 2018, we think possibly more distressed owners were unable to dispose of properties quickly enough and may have defaulted on their loans.”

Colliers Research expects total listings could grow by 10% in 2020 as more properties are put up for sale amid an uncertain environment, particularly in view of the potential economic impact should the COVID-19 outbreak becomes protracted.

With rising listings, the success rate fell further to 1.4% in 2019, much lower than the 3.2% achieved in 2018 and it is the lowest annual level in Colliers Research’s database.

Mr Steven Tan, Senior Director of Capital Markets at Colliers International, said, “We believe the declining success rate reflected the continued price gap between buyers and sellers. Also, we notice that only 8 out of 21 (or 38.1%) of the properties sold during auctions were transacted above their respective opening prices, indicating that buyers remained cautious during auctions and sellers are still holding onto prices. It may also be a case of buyers needing more time before taking the plunge, which resulted in some sales being done after auction sessions – these sales are not reflected in the data set under successful auction sales.”

Despite the lower number of sales in 2019, the total aggregate value of properties sold at auctions remained relatively stable at S$50.1 million, a marginal decline of 1.7% YOY, due to the higher quantum per unit transacted in 2019.

Ms Song added, “We remain watchful of the market and would expect some potential distress from the ongoing COVID-19 outbreak if it leads to a protracted downturn. In particular, mortgagee sales in the retail, industrial, and residential sectors could increase in the second half of 2020. Given the uncertain environment, we anticipate that the price gap between sellers and prospects could narrow and in turn, sales and success rate may improve.” 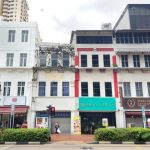