Cushman & Wakefield has released their APAC Office Report: Outlook 2020, which has indicated greater opportunities for office occupiers despite a challenging 2020 ahead resulting from the COVID-19 outbreak.

The COVID-19 pandemic has exacerbated office market cycles, particularly in those markets where availability has been rising. As a result, most key markets in Asia Pacific will turn more occupier-friendly. As landlords scramble to protect long-term tenant relationships and defend against increasingly attractive incentive packages from their competitors, the negotiation ball is now more firmly in the court of the office occupiers.

James Shepherd, Head of Research, Asia Pacific, stated: “As seen in all major territories, governments and central banks around the region have been responding to the situation with policy measures and financial aid to mitigate the economic impact. With China now appearing to be succeeding in controlling the outbreak at home, the World Health Organization believes that it is still possible to change the trajectory of the pandemic.

Assuming this scenario holds, and the global economy experiences a stimulus-fuelled rebound, we can expect office leasing activity to pick up in H2 and beyond as normal business activity gradually resumes. Although some local markets have started to show signs of recovery, global economic headwinds are likely to temper this.”

In Greater China, an influx of supply had recently prompted a downward rental trend in Shanghai, Beijing and Guangzhou. Given the impact of COVID-19, rentals are expected to slide further. For Hong Kong, the outbreak deals a second blow to a property market already weakened from social unrest. The premium office market is expected to remain under pressure over the near-term.

Rental growth is likely to be weak in Sydney, Australia, over 2020 due to the economic impact of the pandemic. However, relatively muted supply and low vacancy suggest growth can return relatively quickly with economic recovery. In contrast, rents are nearing peak in the current cycle in Singapore. Despite lower market confidence, landlords have been able to hold their rents steady for the moment due to tight vacancies and limited upcoming supply. Global economic and geopolitical uncertainties are also taking a toll on the ability of companies to secure budgets for relocation and expansion, limiting the demand for office space.

Dr. Hideaki Suzuki, Head of Research & Consulting, Japan, said: “An increase in vacancies can be noted in Tokyo, Japan, currently at historical lows of below 2%, and is pending as tenants look to move into new projects, and secondary vacancies rise. Consequently, as a result of the outbreak, the market is braced for a change in direction.

“Asia Pacific became the first region to experience the real economic repercussions of the COVID-19 outbreak. China’s GDP growth will be dented, which in turn will exert economic stress on the Asia Pacific region and the global economy. However, a rebound in economic activity is expected to prompt a gradual return to pre-outbreak office market conditions by 2021.”

The report, which compares occupancy costs for premium office buildings across the world’s leading real estate markets, reveals that Singapore holds the 14th spot worldwide, with net effective rents and occupancy costs running US$117 per year per square foot. That is slightly more than half the premium rents in Hong Kong’s Central district, the most expensive submarket. 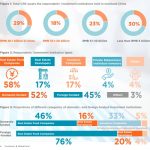