Will the brewing trade spat affect the positive real estate sentiments here? President of the United States of America (POTUS) Donald Trump on Friday announced tariffs on US$50 billion worth of Chinese imports, signalling the beginning of a trade spat. Tariffs of 25 per cent will be applied to goods that contain “industrial significant technologies,” his Administration said.

China has responded in kind to the POTUS’s announcement, and has unveiled a list of products from America which will be subjected to additional duties of 25 percent on 659 items of US products worth about US$50 billion.

While the brewing trade war between the USA and China will impact certain industries like steel, pork, high tech, services hard, it is undeniable that the industry to be most impacted by the trade spat will be properties –  and the the positive real estate sentiments.

Trades spats between the two superpowers is expected to move rates sharply both directly and indirectly and this in turn will impact both residential and commercial properties. Rates (both exchange rates and interest rates) are one of the largest drivers of real estate profitability on income properties, affordability for owner occupied properties, and in turn, positive real estate sentiments.

A recent Economist article pointed out that Asia’s small and open economies may suffer the most in America’s trade war with China. The article said “30% of the value of the goods China exports to America is added elsewhere”, and that “if the row escalates, countries entwined in Chinese supply chains will suffer.”

In a chart the article carried to illustrate its point, Singapore was listed at 3rd place for value-added services to Chinese exports to USA, as a percentage of the GDP. Singapore is part of “China’s great export machine” that Trump is hell-bent on destroying. The percentage of GDP (Gross Domestic Product) our exports add value to China’s exports to the USA suggests that if the war of words between the two giants erupt into a real trade war, we will be caught in the middle.

A trade spat among other things, may drive up inflation levels in the USA and push the US dollar to be stronger, affecting the exchange rate. If the Singapore Dollar weakens against the US Dollar, there will be an upward pressure on SOR, increasing its value. The opposite happens if the greenback weakens against the SGD.

SOR is set by the Association of Banks in Singapore and comes in different blends of 1-, 3-, 6- , 12-month. Upon maturity of the SOR tenor, there is a Forex conversion from USD to SGD, but there is no bid and spread, therefore the banks save money among themselves. Also, as SOR can be interpreted as currency swaps between USD and SGD, it has slightly more volatility compared to Singapore Interbank Offered Rate (SIBOR). Not only the home loan interest rates tied to SOR witll rise, but also packages tied to SIBOR.

The three-month SIBOR (Singapore interbank offered rate used to price home loans) remains at 1.52 per cent even after the recent US Federal Reserve rate hike, but it is still at its highest since 2008 during the global financial crisis.

Singapore’s real estate market finally showed some recovery in late 2017 with property prices increasing, after 15 quarters of continued decline in the Property Price Index. Analysts expect a higher exchange rate to pose mounting challenges for the buoyant real estate market which has picked up steam in the last few quarters.

A recent research report by RHB invest said that the rebound in property prices since 3Q17 is a positive sign that the doldrums in the property market has ended and that the positive real estate sentiments are at an all time record high.

“We believe the major trigger for this round’s recovery are rising en-bloc sales, exacerbated by owners re-entering the market as they seek alternative places to stay,” the report said.

The report however cautioned that a high number of supplies coming onwards – following a surge of en-bloc sales – are likely to dampen property prices over the next few years. “This is because developers have to build, sell and complete en-bloc land projects within a 5-year period to avoid higher charges,” it noted.

On the demand side, affordability has improved with the recent rebound in property prices, driven mainly by local buyers. However, low rental yields are likely to keep away property investors who are chasing for good returns.

The report suggested that property prices are likely to grow by 5-10 per cent in 2018, with the pace of increase to slow in second half with the oncoming rise in supply. Property prices are also expected to reach a peak within the next few years. But liquidity from en-bloc, and replacement and pent-up demand, should allow the
property cycle to last for a few years.

RHB said that in its view, Singapore is likely to see prices increase up to 20 per cent more from the current value, but a trade spat between China and the USA is most likely to have a dampening effect of the real estate price hike.

The recent recovery in prices has also led to an improvement in the positive real estate sentiments, as shown by the National University of Singapore-Redas (NUSRedas) Real Estate Sentiment Index, which has improved to a reading of 6.9 from 6.6 in the third quarter of 2017 (a reading of above the 5-unit threshold implies improving market conditions).

The positive real estate sentiment will likely be a casualty of any trade spat between trade giants and great superpowers.

If you are home hunting, are concerned about the escalating property prices and want a bang for the buck, our Panel of Property agents and the mortgage consultants at icompareloan.com can help you with affordability assessment and with best home loans. The services of our mortgage loan experts are free. Our analysis will give best home loan seekers better ease of mind on interest rate volatility and repayments. 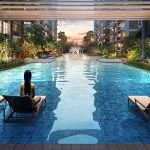 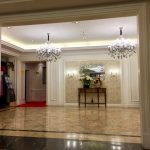