The Landmark, an upcoming 396-unit, high-rise condominium tower, is scheduled to launch sometime in 1Q2020, says Darren Chew, COO of ZACD Group. The project is on the site of the former Landmark Tower on Chin Swee Road, which ZACD and its joint-venture partners purchased en bloc for $286 million in May last year.

ZACD and its various funds, together with SSLE Development, own a 70% stake in the joint-venture development company, Landmark JV, with MCC Land taking up the remaining 30% stake.

The Landmark is the first residential development project where ZACD is the majority stakeholder, says Chew.

“In the past, we were happy with a minority stake and being just an investor in a development,” he explains.

Qingjian Realty’s residential development projects that ZACD has invested in, typically through a fund structure, range from Riverparc Residence, its first investment in an executive condo (EC) in Punggol in 2010; to more recent projects such as iNZ Residence EC in Choa Chu Kang; Le Quest mixed-use commercial development in Bukit Batok; and JadeScape private condominium in the Marymount-Thomson Road area.

Over the past three years, the group has re-fashioned itself into a property development, property management, fund management, asset management and financial services company. “We’re an integrated asset manager, a hybrid of all these businesses,” says Chew.

In January 2018, ZACD was listed on GEM, the board for small- and medium-sized companies on the Hong Kong Stock Exchange. Co-founded in 2005 by Stanley Yeo, group CEO, and his wife, Kain Sim – who is the group chairman – ZACD had its origins in the industrial sector, taking stakes in industrial developments and marketing strata units in these projects via the group’s real estate agency arm, SLP International. The latter merged with Scotia Real Estate in 2017 to form SLP Scotia. SLP Scotia has 376 registered agents as at Nov 11, and has been spun off from ZACD as a separate entity.

When the Singapore government hiked additional buyer’s and seller’s stamp duties as well as introduced the total debt servicing ratio (TDSR) loan framework in 2013, many investors and property developers began to look at investment opportunities beyond Singapore’s borders. So did ZACD.In 2014, ZACD took a minority stake in Frontier Industrial Park in Malaysia alongside local property developer, WB Land. ZACD was also the project manager and property manager. Since then, the company has also invested in a workers’ dormitory in Tebrau, Johor.

The group has made a series of investments in Australia too. It started with a 52,969 sq ft, three-storey office building located at Cheltenham’s commercial precinct, in the Bayside Business Employment Centre in the suburbs of Melbourne. Last year, ZACD purchased the serviced apartment component of the The Sebel West Perth Aire Apartments for A$12.5 million. The 22-storey tower contains 64 serviced apartments, with the hotel occupying the first four levels.

In September, ZACD and Sydney-based fund manager iProsperity Group (iPG) announced their acquisition of a portfolio of 23 hotels in Australia from Luxembourg hotel investor AccorInvest for a total of A$212.6 million ($198 million).

The portfolio is made up of 17 hotel assets and six lease interests. The portfolio has a total of 3,046 rooms combined – in major cities such as Sydney, Melbourne, Canberra, Brisbane and Perth. Of the 23 hotels, 17 are managed by AccorHotels through management agreements and branded ibis or ibis Budget. These have a total of 1,797 rooms, with the two largest hotels being the 200-key ibis Sydney Airport and the 156-key ibis Budget Sydney Olympic Park.

Initially, the portfolio of 23 hotels will continue to be managed by AccorHotels. “Post-acquisition, we will also assess the operating model to unlock the value of the assets,” says Chew. “We are confident that we can bring down the operating cost and increase the yield on the properties. We have also set aside some funds for asset enhancement.”

The investment in the portfolio of 23 hotels was made under ZACD Australia Hospitality Fund in a 50:50 joint venture with iPG. The group intends to look for more hospitality deals that are similar, says Chew. It is also interested in looking at more acquisitions of existing assets where it can add value through enhancement exercises. “We are looking to launch a similar turnaround fund in Singapore next year,” he adds.

Meanwhile, the group will be focused on the marketing of The Landmark next year. The 99-year leasehold project is located at the fringe of the CBD and is perched at the top of Pearl’s Hill City Park. It will be a 39-storey tower containing a mix of one- to three-bedroom apartments, with sizes ranging from 484 sq ft to about 1,152 sq ft.

The design architect of The Landmark is Singapore’s oldest, namely Swan & Maclaren. Construction of the showflat is currently underway, and slated for completion towards the end of the year.

“As The Landmark is located on an elevated site, it offers unblocked views of the city skyline and the park,” says ZACD’s Chew. “And that’s the reason we chose this site. It also gives us the opportunity to create a product that caters to ‘urban city living next to a green park’.” Nearby is also the Singapore General Hospital (SGH), where there is a 20-year masterplan for a future SGH campus that is poise to be a major medical hub.

The proximity to the future SGH campus should attract investor interest – as has been observed in the new residential projects located near Health City Novena, notes Chew. “There will be a healthy tenants’ market with doctors and other medical professionals working there in the future.”

The closest comparable residential project in the area is One Pearl Bank, located on the opposite end of Pearl’s Hill City Park, and just off Outram Park.

Launched in mid-July, the 774-unit One Pearl Bank, a redevelopment of the former Pearl Bank Apartments, has sold 242 units at an average price of $2,387 psf, based on caveats lodged as at Nov 12.

Besides its proximity to the CBD, The Landmark’s appeal is its proximity to Chinatown, Robertson Quay as well as Tiong Bahru, which has been gentrified with many hipster cafes and popular local eateries, notes ZACD’s Chew. 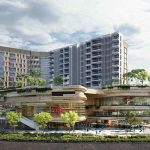 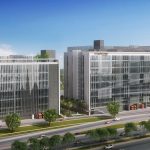