The Ministry of National Development (MND) will set aside $29 million to upgrade another 10 private estates under the tenth batch of the Estate Upgrading Programme (EUP).

Upgrading works vary based on the condition and needs of each estate, and in the past, have included providing footpath lighting to enhance safety and security, enhancing barrier free access (e.g. wheelchair-accessible ramps), improving the estates’ landscaping and parks, and enhancing the estate identity (e.g. through estate markers). In addition, EUP works are integrated with improvement works by other agencies where possible, for instance, drainage upgrading and coverage by PUB.  See Annex for some examples of improvement works carried out.

Through the previous nine batches, the EUP has benefited more than 46,800 households in 63 private estates. For the tenth batch of the EUP, MND has selected 10 estates for upgrading (see Table) at an estimated cost of $29 million. In total, more than 7,000 households will benefit from the improved facilities when upgrading works are completed in about four to five years’ time.

The EUP has contributed to the rejuvenation of many private estates around Singapore to meet residents’ needs and to promote community bonding.

As part of the EUP process, the Neighbourhood Committees (NCs) and Citizens’ Consultative Committees (CCCs) will seek feedback and inputs from residents, so as to incorporate their views in the upgrading decisions.

MND encourages residents to participate actively in these discussions. This it said will not only help to ensure that the upgrading works meet the needs of residents, but also give the community a greater sense of ownership over the common spaces in their estates.

In October 2018, an MP asked the Minister for National Development whether the Ministry can expedite and extend the upgrading works in the common areas of private estates under the Estate Upgrading Programme especially in estates above 30 years old, with priority given to older estates.

The Minister replied to the parliamentary question saying:

“For the Estate Upgrading Programme (EUP), we do prioritise older estates, especially those with greater need and scope for significant improvement.

“We are currently coordinating with other agencies that are planning upgrading works, to minimise inconvenience to residents. We will contact the Citizens’ Consultative Committees to seek nominations for the next batch of EUP estates soon.”

More than 46,800 households in 63 private estates have benefitted from the programme, with more than 7,000 households in the 10th batch to be added to the tally when upgrading works are completed in about four to five years’ time.

In October 2019 at an MND Huddle event, the Minister for National Development Lawrence Wong said, in total, his Ministry expects more than $1 billion in upgrading projects across Singapore over the next few years, for both public and private estates. This is a significant amount that MND is putting in to upgrade and renew housing estates.

“Overall, we can expect a healthy pipeline of public sector projects in the coming years. For all of you in the Built Environment industry, I am sure this will come as good news, because in the current economic climate, our assurance is that we will continue to have a good pipeline of public sector projects, which hopefully will provide support for our important industry partners, be it consultants or contractors.

We are not only undertaking more projects; we also want to change the way in which we go about these upgrading projects. The typical way in which we do such upgrading projects today is that the Town Council or government agency will work with the consultant, put together the plan and exhibit it, and gather feedback from residents. It will then do some minor fine-tuning; and proceed to implementation.

The process is not bad, but certainly it can be improved. We want to involve residents at the early stages of the project, even in the design and planning stages. This will take more time and effort, but I think it will be worthwhile. Residents will have a stronger stake in their estate and they will have a greater sense of ownership of their common spaces.

In fact, we have started trying out this different approach – one example is this upgrading project at Tampines Central. The residents came together to design new spaces along a linkway frequently used by the community. They got together and discussed their plans. They eventually decided on several projects, including a community garden and an art mural. From an empty void deck, they now have a cosy community café that also functions as a community library. As the residents were the ones designing and coming up with the project, it is a space that is well-used and even maintained regularly by them, and now we see spin-off projects because they are making use of these new spaces for regular breakfast and even exercise sessions.

This is a good example of how when residents themselves are empowered in designing, thinking and developing the project, the sense of ownership is greater and they make full use of these spaces. It takes longer, as I said. A lot more effort is needed – sometimes to even work out compromises because one group of residents wants something and another group wants something else; you have to sit down and sort out your differences and reach a compromise. That kind of engagement is worthwhile and we should do more of that.” 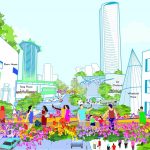