Colliers International announced on 13 July that they will launch the collective sale tender of Baode Building at 8 Lorong 35 Geylang.

Baode Building is for sale at an indicative price of S$27 million.

This translates to an estimated land rate of approximately S$989 per square foot per plot ratio (psf ppr) or S$967 psf ppr after factoring in a 7 per cent bonus balcony gross floor area. The single 8-storey residential building currently houses 14 units with a site area of 1,031.4 square metres (approx. 11,102 sq ft). Under the Urban Redevelopment Area (URA) Master Plan 2019, the site is zoned for residential or institutional use with a gross plot ratio of 2.8 and an allowable height of up to 8 storeys.

Baode Building is a rare freehold building which is strategically located at the fringe of Singapore’s Central Business District (CBD). It is linked via the Pan Island Expressway and Kallang-Paya Lebar Expressway that connects to other parts of the island, including prominent areas like Midtown (Bugis) and Kallang Sports Hub. The site is also well-served by major public transport nodes such as the nearby Paya Lebar MRT interchange station, which links the East-West Line and Circle Line.

An array of dining, retail and entertainment are readily accessible at established outlets, including PLQ Mall, Singpost Centre and Paya Lebar Square. Additionally, Kong Hwa Primary School and Geylang Methodist Primary School are within a 1km radius of the building.

Surrounded by green spaces, joggers and cyclists can utilise the Geylang Park connector to Gardens by the Bay through Tanjong Rhu Promenade. The nearby recreational facilities such as ActiveSG Swimming Complex and Public Library are also a stone’s throw away. Healthcare centres like the Kallang Polyclinic, adjacent to the redeveloped Kwong Wai Shiu Hospital, is a 10 min drive away.

Mr Steven Tan, Executive Director, Investment Services at Colliers, commented: “This site boasts an exciting potential for rebranding or repositioning the asset as it is situated around the Paya Lebar precinct where the URA Master Plan envisage to develop Paya Lebar Central into a bustling commercial hub. The rare freehold tenure of the site also ensures long-term reassurance for developers, especially at such a major employment area.”

Mr Tan added, “It sits on a regular-shaped land, denoting the technical efficiency of construction and maintenance.” Tan concluded, “Given its strategic location, proximity to a myriad of and strong transport network, the site offers a good real estate investment.”

Colliers International said that the collective sale tender for Baode Building will close at 3 pm on 18 August 2021.

Geylang is only about 2.5km from Bugis junction and it is also near to Suntec City and Marina square. Silently though, Geylang is also gradually known as the second china town where new Chinese citizens and PR congregate to Sze Chuan Food, North Eastern food, Hunan food and so on. Fruit stalls, great food and Geylang, with its proximity to the town centre is coming to the fore. In recent years, there has also been many new developments springing up in Geylang.

In Geylang, there were many little “Enbloc” developments which were formed by amalgamating typically 3 to 10 house/commercial lots and built into small hotels. You will probably not hear of these enbloc developments in the news. The bigger developments such as those gated apartments could perhaps be made up from 10 to 30 landed lots.

The biggest condominium would be Waterina along Lorong 40, and it has full condominium facilities and has 398 units. The bigger condominiums such as Atrium residences along Lorong 28 which was complete in 2008 has 142 units.

Mr Ho said, “Because of some shady businesses that are in Geylang, banks tend to shy away from that area in general. Before 2009, many banks shy away from Geylang even number Lorong. That means not many banks would deal in Lorong 4 till Lorong 40, except for on a case-by-case basis. The entire market was mostly left to Hong Leong Finance and Singapura finance.”

OCBC and Maybank can finance Lorong 26, 28 subject to project as well as customer profile. Some of the lenders impose a loading of 0.25% on top of their usual lending rates for Geylang with even number Lorong. 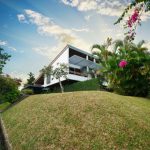 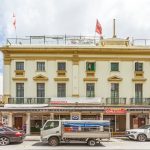